On November 30th I finished writing my second novel. It feels weird to call it my second novel because the first one was written in a haze of youth, naivety and sophomoric storytelling. I know for a fact that I’ll look back on this project in the same light when a similar amount of time has passed, but for now it’s the apex of my creative efforts to date. Just over 50,000 words of wintery darkness set in the distant past.

I have a tough relationship with National Novel Writing Month (NaNoWriMo), the yearly event in which participants attempt to write a 50,000 word manuscript in the month of November. The contest continues to to grow yearly despite its age, having begun in 1999. While the event places a strong emphasis on community with online forums and local meetups all over, I’ve never really found that aspect particularly helpful. There are lots of cat people, Harry Potter fanatics and writers hoping to create the next great cult young adult series. There’s nothing wrong with that culture, but I just don’t find myself taking much inspiration from the “Maze Runner” style of writing. So I went into the project alone, using the official NaNoWriMo website as little more than a place to measure my progress with their official word counter.

On the morning of October 31st I had planned about two thirds of the novel satisfactorily. The last third of the story was an enigma, I would write down some dramatic climax or ending and then delete it, repeating the process several times. My characters weren’t particularly well fleshed out either, to put it kindly. The worst part was that I had barely done any research into accurately portraying the Canadian wilderness in 1750 other than watching The Revenant in theaters 2 years ago. All the same, I felt far more equipped and far less overwhelmed to write about that than anything or anywhere in the present day.

I don’t like to prepare last minute unless I need to, and I figured I would flesh out the plot as I went along rather than force it without getting a feel for it first. So with a half baked story I ventured out into the late October woods outside my city, looking for one last burst of autumnal inspiration before the task at hand creeped up and overtook my free time for 30 days.

The first few days of the month were easy. But on election day I worked at the polls in my city for over 16 hours and was unable to write a single word. I slowly but surely got back on track by writing an extra few hundred words per day until I was caught up.

I hit a rough patch in the third week of writing. The narrative wasn’t quite as far along as I wanted it to be and I was beginning to miss my other projects – writing articles and making videos to be exact. Finishing the day’s words was a chore, it felt like I was wading through a creative swamp, trying nothing new and rushing to the finish line. It took a lot longer to write during this period and I began to doubt that I would even finish the project. Every night I would finish writing at 11 PM, exhausted and continuing only because I told myself that I would, not for any reason related to the decidedly poor words I had put down on paper.

But in the last week of my book I was hit with a wave of inspiration, I could feel the plot of my book grow stronger and the writing more powerful as my brain overflowed with ideas. I was happy with what I was writing, perhaps even proud and I rushed to my laptop each morning to get a head start on the day’s work rather than leaving it all until 9 PM.

I finished the book on the morning of November 30th. The narrative of the book isn’t quite done, but I left the story on a satisfying cliffhanger to satiate my desire for completion until I can finish the story later on.

The experience of writing an entire novel in 30 days taught me a few things. Fitting a creative process that can take years into just a single month was entirely achievable, but it felt weird. I wasn’t able to develop characters as much as I wanted, the world my novel takes place in is shallow because I had no time to flesh it out. There are certain aspects of a novel that come only from the author mentally inhabiting the novel’s world for some time, and I missed out on that.

What stood out perhaps the most to me about the experience was I didn’t find myself putting any deeper meaning in the text.. As an avid consumer of art I put a good deal of time into investigating an artist’s intentions. But while I wrote this book I found myself telling a story for its own sake. I’m sure that if a reader were to find some deeper subtext in the book they could very well be correct that it was there, but consciously that was the last thing on my mind while writing the story. I’m eager to write more and see if the trend continues.

I had a great time writing my book. It was exhausting, but it was also really fun to play in the world of my story and create a narrative. There were parts of the writing process, I admit, that affected me emotionally. At first I didn’t even realize it, but I became quite fond of a few characters in my story.

I urge everyone to try NaNoWriMo. It’s hard to tell what the lasting effect of this project will be, if any. It could sit in my computer forever, because I’m certainly not confident enough to read it all myself. But the experience is worth it. Writing a novel in 30 days is more than worth it, if you have the time and desire. When there’s no time to lose, the writing process becomes easy. When I’m not facing a deadline, I can find it hard to work quickly, and NaNoWriMo provided everything I needed for the project to move quickly. Writing a novel was an amazing experience, it feels great to really use your head so intensely for a month straight.

I plan to publish the novel chapter by chapter online over the next few months while I edit and complete the story. Stay tuned if you want to read “Kill Them Slow,” a gothic story about the hardest winter Canadian fur trading settlement Fort Valeur would ever face. 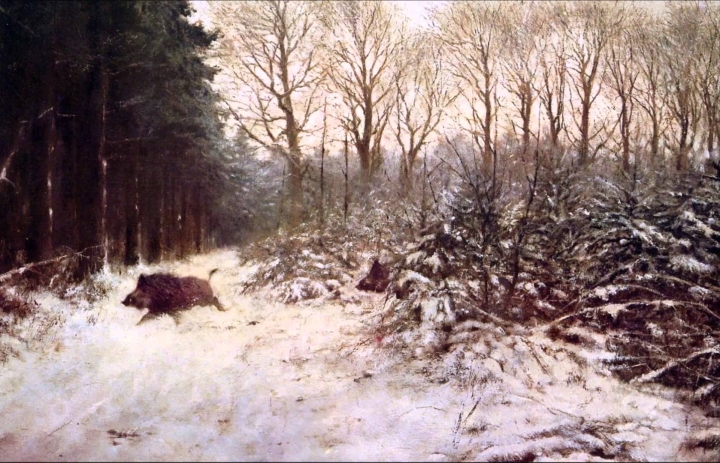